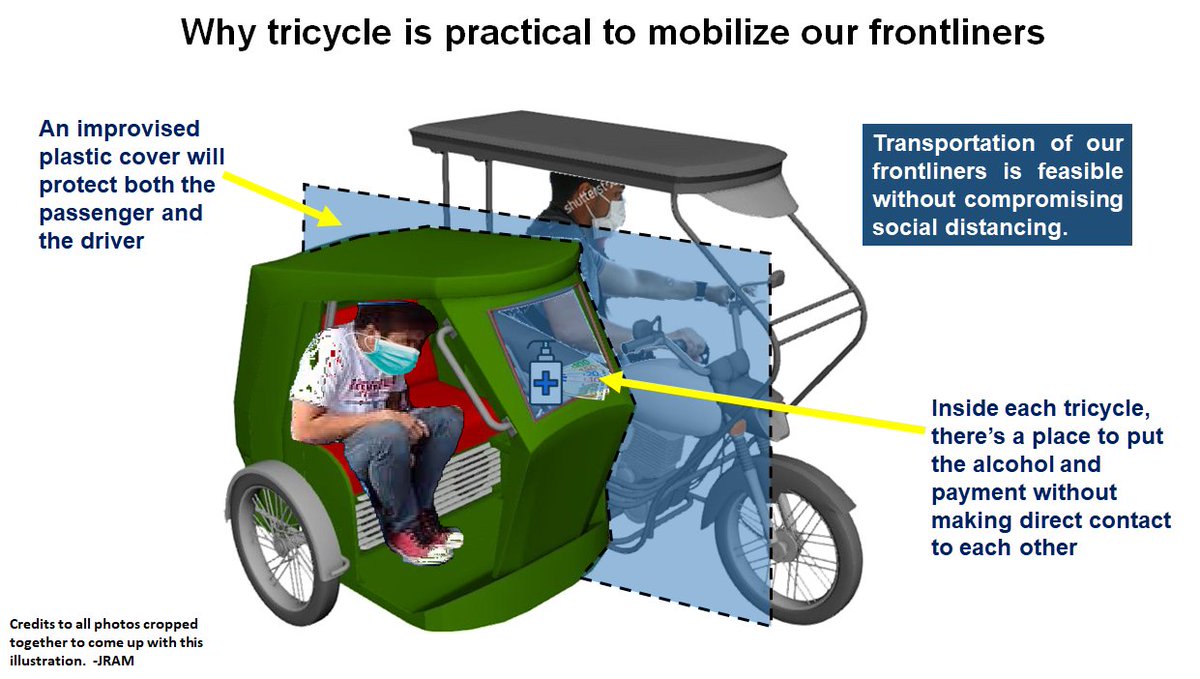 One of the worst kinds of ossified thinking in the present Lockdown Mindset, from which the Philippine government apparently cannot escape, is that the so-called Enhanced Community Quarantine cannot allow for mass transport vehicles to operate regularly because that would violate “social distancing” and defeat the very purpose of ECQ. To my surprise, even some progressives agree with this mindset. They apparently forgot that just before the NCR-wide lockdown on March 15 (which quickly turned into a Luzon-wide lockdown a day later), mass transport services were already starting to try and implement innovative ways to retool themselves to prevent rampant virus transmission inside public vehicles.

Many of us have seen the Covid-19-ready tricycle schema shown above, which many people had welcomed based on the experience of Pasig under Mayor Vico Sotto’s able leadership but which was promptly shot down by the NTF as a “violation of the IATF guidelines.” Apart from that, we probably also saw pre-lockdown efforts by buses, jeepneys, and metro trains to make similar adjustments, as shown in the photos below–all posted by mainstream media and therefore not a product of my befuddled mind.

So please read the captions below each picture. They form part of my argument against the lockdown, and specifically against the decision to suspend all forms of public mass transport except for special shuttles for medical workers. Also, be aware that even in locked-down Baguio City, with a former general as its current mayor, jeepneys are allowed to play their routes so long as they follow a set of rules related to physical distancing, passenger control, and hours allowed on the road. In short, mass transport is not just possible, it’s actually being allowed in some cities at this time but with some restrictions related to the avowed aims of the lockdown.

The only real challenge in implementing these physical-distancing schemes is that mass transport economics will either assert itself in the form of higher fares, or else the privately operated PUVs (buses, jeeps, and tricycles) will refuse to ply their routes lest they die due to huge revenue losses.

But this challenge will sooner or later confront us anyway. Why not confront it now, why not hold dialogues now with the transport sector, why not explore the possibilities of state subsidy to TODA’s or state equity in transport coops, why not force ourselves to think of practicable solutions now rather than run and hide in fear under the false safety of a lockdown? #