At twelve, I was a World War II veteran and D-Day survivor in Normandy. Vicariously of course, only vicariously.

Blame it, first, on the weekly episodes of Combat!, which at six I began to watch with my brothers and cousins at Auntie Maura’s house along nearby South-9 (now Scout Fuentebella) Street, which had television. Blame it, second, on our family driver and most cheerful lifetime friend Manong Natoy, who brought us kids to watch the film The Longest Day, a cinematic retelling of the June 1944 Allied landings in Nazi-occupied France, when I was seven. Both the TV show and the movie made a huge impression on me.

END_OF_DOCUMENT_TOKEN_TO_BE_REPLACED 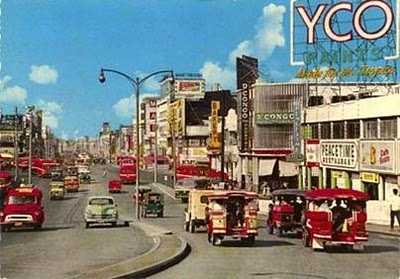 Does anybody above 50 still remember PECO? I do. It was one of my earliest recollections of shopping in Quiapo with my mother.

PECO meant Philippine Educational Company. It was along Arlegui, just a corner away from the north-bound foot of the Quezon bridge, which back then still smelled of fresh river water. A quick search indicates that it was established by one of the Thomasites in the early 20th century, and had become one of the biggest bookstores in the country after World War II. In my vague recollections, it had the feel of a bombed-out building or a huge warehouse, with rough unpainted concrete posts and beams, and would be considered absolutely ugly by today’s Powerbooks standards.

END_OF_DOCUMENT_TOKEN_TO_BE_REPLACED

Those who stayed for extended periods in the old Kamuning house invariably noticed the books. Four tall book cabinets higher than a grown man (two in the living room, two upstairs), and additional bookshelves scattered all around the house, contained hundreds of titles, when we young siblings still lived together with our parents under one roof.

This huge assortment of books, pamphlets, monographs, and a Britannica set (1968 edition) even had a name: our parents called it the “Pio Verzola Library” and had the most important volumes stamped and tracked with a card pocket at the back of each book. My mother had some library training, and so we kids were taught that the books at home followed a system similar to what we followed in the school library. END_OF_DOCUMENT_TOKEN_TO_BE_REPLACED