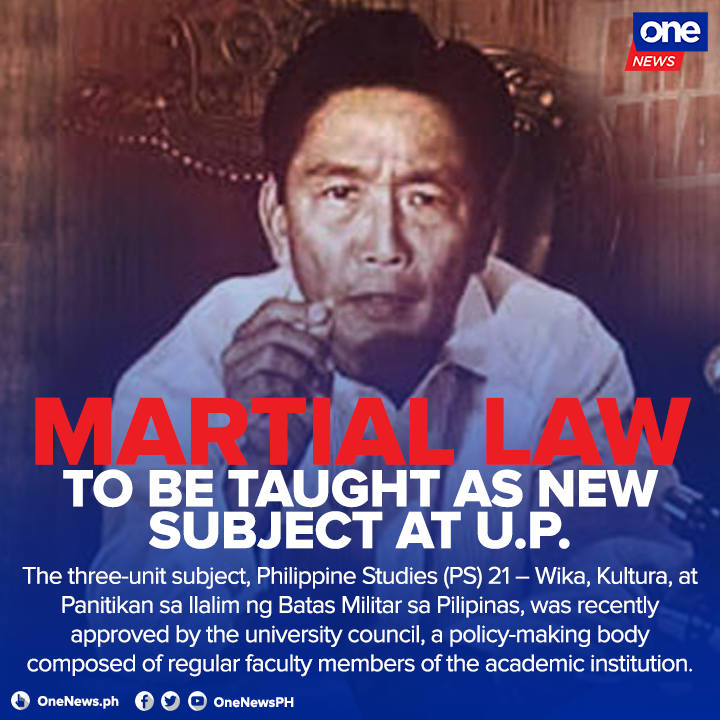 A One News story (https://onenews.ph/martial-law-to-be-taught-as-new-subject-at-up) reported that starting “next semester, students at the University of the Philippines Diliman may enroll in a subject that will tackle language, literature, and culture under the martial law.”

The three-unit subject, recently approved by the university council, is designated as Philippine Studies (PS) 21 – Wika, Kultura, at Panitikan sa Ilalim ng Batas Militar sa Pilipinas, (Language, Culture, and Literature under Martial Law in the Philippines). “It will be offered by the university’s Departamento ng Filipino at Panitikan ng Pilipinas and will be available for students from all disciplines as an option for their general education subject requirements,” the news report clarified.

Most comments from activists that I read on Facebook that day welcomed the UP Diliman move. Most said, basically: “Great! It’s about time!” As if that (the lack of a university course on martial law) was the biggest or at least a major bottleneck in educating the youth about the dark years of the US-Marcos fascist dictatorship (1972-1986).

What I did was to read the story thoroughly, including the reference document embedded into the story from Scribd. (https://www.scribd.com/document/425907079/Philippine-Studies-21-Wika-Panitikan-at-Kultura-sa-ilalim-ng-Batas-Militar-sa-Pilipinas) The news report was good enough as a summary, but the document indicated a much more complicated background.

Call me a skeptic, but the UP decision is not automatically a good thing. Read through the many troll comments under the original OneNews post on FB to realize that the Marcos loyalists are raring to enter this arena of battle. As expected, Imee Marcos immediately remarked that her family’s side should be equally heard or represented.

What’s worrisome is if the professors or instructors handling the new subject would be inundated by pro-Marcos teaching materials that will harp on the “greatness of martial law.” As one US-based activist commented in a sarcastic tone: “Martial law was a great time. Everyone followed the law and kids obeyed curfew. Now go write a 10-page review of your favorite Marcos-funded art piece.”

Hence, the most crucial will be the approved syllabus and the standard textbook/s to be used. It wasn’t clear from the Scribd document if the syllabus was already approved or yet on the table.

This is in addition to the built-in limitation of the subject PS 21, which is on “language, culture, and literature” — which the Marcoses would even consider as their “strong suit”, what with their reputation as “patron of the arts”, builder of the Cultural Center of the Philippines, and so on. So what about the economics and politics of martial law? Shall these be treated just as “backgrounders”?

In other words, the current antifascist movement should make sure that the expected content of the course isn’t turned into its very opposite if only due to the voluminous “source materials” that will be dumped on the teaching faculty by the very pro-active fascist camp—and I’m not just referring to the Marcoses.

In fairness, the proponents’ rationale and the syllabus (which I assume is already approved) appear to be on the right track. I’ve just gone through the syllabus—the aims, suggested/required readings etc.—and, except for a few really toxic items. Its stand, and those of its most vocal proponents, are explicitly against fascist dictatorship. (UP should really be super-biased vs fascist dictatorship!)

But the “few” toxic items include such worrisome materials as the Marcos tracts on New Society and even Enrile’s voluminous biography. These items must be purged from the list of references, otherwise they will poison the entire course. We must be wary of derailing by academic saboteurs and fifth-columnists, which has happened many times in the past.

Another problem is that, as another activist rightly noted in a Facebook remark, “most of the country will never attend UP and those that do will likely already be imprinted by pre-established ideas. A greater emphasis on Martial Law education at Elementary and Secondary school level is key.”

In short, the UP subject is just a drop in the bucket. At the college level, there should be a campaign for other state universities and colleges as well as privately owned ones to adopt a similar syllabus or education program. The really big push should in fact come from the Commission on Higher Education, and the Department of Education which develops and approves curricula and textbooks for elementary and secondary schools.

All antifascist forces should be producing more textbook-level materials on the Philippines’ experience of fascist rule—whether or not this UP course remains on its antifascist track and whether other schools adopt similar courses. #