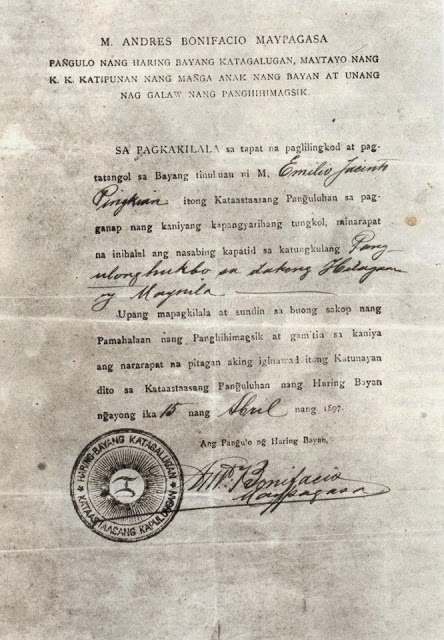 In the face of growing indications of martial law looming in the horizon, a Facebook friend posted the following question: “If things reach a point where [dissenters] will have need for an alias, what will be your alias and why?”

This got me thinking about the many considerations on using a pseudonym that revolve around why and how to choose. This is based on my experiences during the many long years of the US-Marcos fascist dictatorship.

Believe me, there will be as many options as there are reasons for your adopting one in the first place (and probably shifting from one to another as conditions change). Let’s look at the reasons one by one, and explore the various options.

1. To protect your real identity within the movement

An underground movement is based on utmost trust among comrades who are sworn to put their lives at stake, face risks and sacrifices together as they fight side by side, and protect each other at great cost. Especially if you grew up together in the same community, or attended the same school, or labored at the same workplace, then of course joining the underground together will only enhance your personal bonds and add to what you already know about each other.

So what’s the point in using pseudonyms among yourselves?

Because an antifascist underground, to be effective, must be a mass-based underground and not merely an insulated network of small conspiratorial groups. That is its strength. But at the same time, having a mass-based character could also produce potential problems, such as so many mass members of the underground having diverse ideas, habits, and sense of organizational or security discipline. Thus the need for compartmentalizing sensitive information, which would include real identities.

If comrades in the underground knew and always called you by your real name, the tendency was for many other people to soon know other aspects of your real identity and background (if only out of curiosity and not malice). Inevitably, word would get around that “a colegiala from St. Scholastica identified as Cherith Dayrit, with fair skin and chinita looks, has been seen organizing the peasants of barrio X,” and soon fascist agents would arrive to pick up the scent.

Thus, in the ND underground during the Marcos years, each activist would adopt a pangalan sa pakikibaka (“name in the struggle”), or simply koda (“code name”) usually at the start of a period covered by the organization’s plan. These names would be used strictly and consistently among members during meetings, in notes and communications, and in introducing themselves to new contacts that they meet in communities, workplaces or schools where they do political work. When there’s a major change of plan, redeployment, or security breach, old names could be dropped and new ones adopted.

The name could be anything, whether it’s a plain and street-functional nickname that did not attract attention to itself, or some unique, dramatic and memorable name that you were just dying to use because it was so cool. But the latter has its drawbacks: precisely because it’s so cool, it would become so popular and attached to you that it would tend to stick even if it’s already in the dossiers of the Marcos intelligence services and being actively tracked by their field agents.

2. To project an alternative or symbolic identity to the wider public

This refers to the classic reasons for using noms de guerre and noms de plume. One reason is of course to avoid the risks of writing on touchy topics or issuing combative statements under your real name in the face of a brutal fascist dictatorship. But often, another reason is hopefully to develop an iconic political or cultural image, which identifies the pseudonym as a symbol that stands or speaks for a group, a political trend, an entire movement, or simply an individual who wants to emphasize something that transcends their real identity.

This tradition has deep roots in the Philippines’ anti-colonial struggle. Dr. Jose Rizal used the names Dimasalang and Laong-Laan in his La Solidaridad articles. Andres Bonifacio used Maypagasa and Agapito Bagumbayan in his Katipunan issuances. The noms-de-guerre of famous Hukbalahap (and later HMB) commanders, such as those of Kumander Dayang-Dayang (Felipa Culala) and Kumander Liwayway (Remedios Gomez), echoed among the peasants’ tales and army dossiers—even after the public already knew of their exploits under their real names. And of course everybody knows who Amado Guerrero (Jose Maria Sison) and Kumander Dante (Bernabe Buscayno) were.

While choosing and regularly changing pseudonyms of the first kind was routine, choosing pseudonyms of the second kind had to be a thoughtful and deliberate process, undertaken with a long-term view, and requiring some allusion to history or literary imagery. It was like a corporate logo or product brand: you developed one that would hopefully last a lifetime of instant public recognition and positive associations.

Remember the legendary Vietnamese communist revolutionary, the long-standing and revered leader of the historic Vietnamese struggle for national liberation? His real name was Nguyen Sinh Cung. He is now identified in history by his best-known nom-de-guerre, together with the famous military supply trail and the biggest city of Vietnam also named after him: Ho Chí Minh.

Such is the potential power of a pseudonym.

3. To provide legal papers that can stand some degree of scrutiny

This was a must for many leaders of revolutionary organizations and clandestine operations who were being hunted down, and who for various reasons had to travel outside the protection of their guerrilla zones. They had to move around, stay in a variety of rented or borrowed quarters under assumed names, and pass through checkpoints. They often had to present identification papers consistent with their cover, and occasionally had to dress, speak and behave accordingly. (The short-cut term for maintaining this cover was called prente.)

During the US-Marcos dictatorship, the risks of organized underground resistance and running clandestine operations—even just renting a venue to hold meetings, or printing and shipping out anti-fascist newspapers, to cite two typical examples—were so high that even ordinary activists learned to lead double lives and produce alternative ID’s as necessary.

You might have a perfectly legal status, holding a legal job and staying at your legal residence, but whenever you went clandestine, there were certain advantages in carrying ID’s that you could produce—as needed, of course—to credibly claim a different name, address, and other personal information.

Many activists hunted by Marcos’ fascist minions were so good at this (dual identity, multiple sets of names and IDs) that they were able to maintain their most effective prente for years. In fact, I know of an activist who identified himself differently when he was arrested, and who thus kept his real identity secret through the years while in detention—even among other jailed activists.

4. To proclaim a new chapter in your life

Finally, there’s this fourth set of personal (admittedly optional, and often with a tinge of romantic or even frivolous) reasons why activists adopted aliases during the Marcos era: generally, to mark the passing of the old or the arrival of the new. It could be that you were deployed to an indigenous area, and celebrated your memorable experiences there by adopting an indigenous name. It could be that you met somebody, fell in love, and you agree to use secret names only understood between the two of you—as a sort of added call sign in certain situations. Or you might have been inspired by the martyrdom of a close comrade, and decided to adopt her name as your alias. (Now you know why many children of activists are named Lorena or Lean.)

There are probably many other reasons—political, cultural, pragmatic and security-based, or personal—why activists and other dissenters adopted other names under martial law. It would certainly produce an added and fascinating layer of recent history if this aspect of anti-fascist resistance is further researched and written down. #