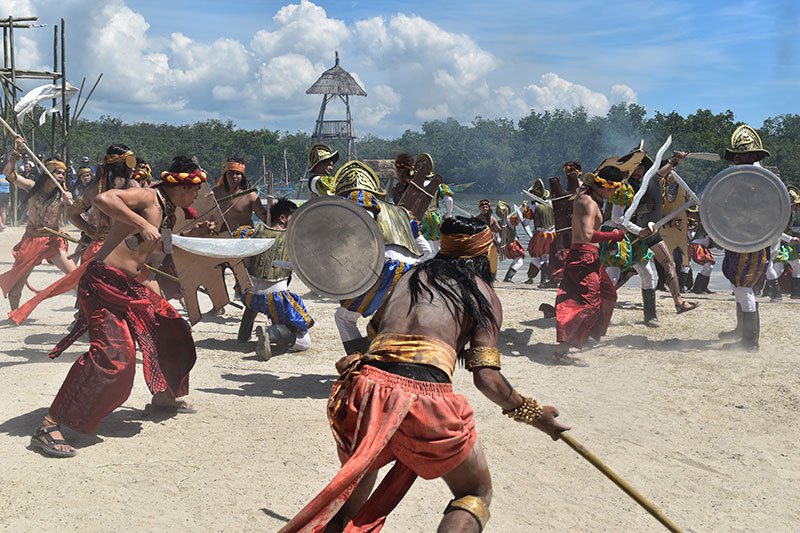 Covid-19 notwithstanding, natives of Las Islas Filipinas should not allow to pass unnoticed several momentous anniversaries that will mark this year 2021.

In the past few years, the approaching quincentennial event has been hyped as global-historic in significance befitting international celebration, if only because the Magellan expedition was able to circumnavigate the globe for the first time. For the Filipino people, however, the year 1521 also marks the start of more than 300 years of Spanish rule, both in its brutalizing and “civilizing” aspects.

We natives will also recall a related event 50 years later, when the forces of Spanish conquistador Miguel Lopez de Legazpi invaded Muslim Manila in 1570-71, defeated Katib Sulayman’s forces at the Battle of Bangkusay, razed the teeming native settlement by the mouth of the Pasig, and founded in its place a walled colonial city. A year later, Legazpi’s grandson Juan de Salcedo would lead an expedition to explore the coastal areas of Northern Luzon and found the colonial city of Vigan.

In this anniversary-laden year of 2021, these historical events are in danger of being buried under the continuing (sometimes even worsening) global and national obsession with Covid-19—the pandemic, the lockdowns, the vaccines, new variants, so-called “conspiracy theories”, and the mass hysteria that they seem to fuel and is further fanned by mass media.

However, even without the pandemic distractions, an inherent conflict may tear the pretty tapestry of the 500th (Magellan) and 450th (Legazpi) anniversaries. There’s a deep-seated contradiction between Western colonialism’s brutally oppressive and plunderous character, on one hand, and its “civilizing” and “modernizing” features, on the other hand. This will surely reflect on how the country will approach the twin anniversaries.

The historical evidence is too voluminous, and this column too short, to elaborate here on the said conflict. But clearly, the two clashing approaches could mar the forthcoming commemoration. The same clash became prominent in 1992, during the 500th anniversary of Christopher Columbus’ so-called “discovery of America,” where there were both dazzlingly positive and celebratory events on one hand, and critical-historical reassessments and anti-colonial reassertions on the other hand.

This could erupt again this year, around the Magellan quincentennial.

The government of Portugal, for example, wanted to focus on celebrating the Magellan expedition’s “circumnavigation of the world.” The Portuguese project would have involved replicas of Portuguese and Spanish and other sailing ships following the routes taken by Magellan on the way to the Philippines, and the Sebastian Elcano-led return trip.

In turn, the Philippines’ National Quincentennial Committee (NQC)—created by President Duterte’s EO 55 in May 2018—together with the National Historical Commission of the Philippines (NHCP)—were to highlight our people’s “first contact” with European civilization and introduction to Christianity, with a “Filipino and Asian-centric perspective.” The NQC-NHCP plan would have centered around an international conference in Manila, with King Felipe VI, the current Spanish monarch, as keynote speaker.

The Catholic Bishops Conference of the Philippines (CBCP) will expectedly take the lead in commemorating the country’s introduction to Christianity, and may announce more concrete plans by mid-January. Earlier, its plans included inviting Pope Francis—probably for activities marking the first Easter mass and the first Christian baptisms in the country. Such plans remain problematic, however, not only since the Pope cannot easily travel at this time, but also since historians are unsure about the exact locations of the first Christian mass and baptisms, whether they were in northern Surigao or southern Leyte.

In fairness, one task of the NQC is supposedly to make Lapu-Lapu a more relevant and authentic hero, since he is apparently the first native leader to have successfully kicked out European colonizing forces in East Asia. Historian Xiao Chua said NCQ will be asking DepEd to teach students a more appropriate image of Lapu-Lapu, based on more accurate historical depictions that he was tattooed, and already an old man during the Battle of Mactan.

The push to raise Lapu-Lapu’s iconic profile higher than his Spanish antagonists, however, seem more superficial rather than transformative for the national psyche. For example, NQC will reportedly ask Duterte to rename the Mactan-Cebu International Airport after Lapu-Lapu; reissue the P2,000 bill with his image; and declare April 27 (the Battle of Mactan’s date) as a national non-working holiday. NQC also wants to build a new park in Cebu, rivalling in size Manila’s Rizal Park, and which will host monuments of Lapu-Lapu and Enrique de Malacca (Magellan’s slave-interpreter).

Unfortunately or fortunately—depending on one’s viewpoint and aims—many of these planned quincentennial activities are now bound to be shelved or drastically reduced due to the effects of the pandemic lockdowns, changed priorities of organizers, and related constraints. Likewise, the City of Manila has been quiet so far on how it will commemorate its foundation date and the related events of 1570-1571.

The NQC has set up a public group on Facebook. Surprisingly, however, it only has 3,200 members at present—a sad commentary on the state of public awareness about the quincentennial, compared to, say, the FB group “Sinaunang Baybayin,” which has 119,000 members, or even the more generic FB group “World’s Indigenous Peoples” which has 96,000 members.

On the side of anti-colonial, nationalist, anti-imperialist, and pro-indigenous-people forces in the country, there have been no widely announced plans either on how they intend to mark the once-in-a-lifetime 500th and 450th anniversaries.

But with the pandemic lockdown placing heavy dampers on the commercial-tourist, academic, and government-cultural dimensions of the said events, perhaps the progressive forces still have a great opportunity to amplify independent voices about the historical onset of Spanish colonialism and the continuing reality of its impacts.

In that regard, I made a rough list of alternative ways to commemorate the twin anniversaries, in the hope that progressive organizations, institutions and influential leaders will find them at least interesting to consider.

1. Reenactments of the Spanish arrivals and the battles of Mactan and Bangkusay

Everyone who has closely followed me on Facebook has probably noticed that I have been doggedly questioning the Philippine lockdown regime on point of scientific and activist principles. Equally, I have been urging everyone to assert their basic constitutional right to hold mass gatherings, including holy masses and other church activities, with due consideration to basic Covid-19 health protocols, of course.

The recent Quiapo fiesta and Black Nazarene rituals in Manila are proof that ordinary people are looking for, and ready to seize, opportunities to exercise their deep-going need to socially gather and publicly express themselves—if only in cultural or religious form.

The 500th (Lapu-Lapu vs Magellan) and 450th (Sulayman vs Legazpi) anniversaries provide again yet more opportunities for the people to assert their legitimate right, this time in appropriate historico-cultural forms such as reenactments of the arrival of the Spanish invaders and of the native peoples’ resistance, epitomized by the battles of Mactan and Bangkusay.

The reenactments need not be very authentic in a military-tactical sense. Rather, these could be more ritualized or theatrical, highlighting the bravery of the native warriors with their indigenous weapons, and emphasizing the color and drama for educational and mass-participatory purposes. Imagine if the reenactments were done on selected beaches to enhance the realism.

Let us push the envelope further and invite as many social institutions, including churches and schools, to participate in mass reenactments. Why don’t we dare local government units (LGUs) to break out of their scaredy-cat Covid cocoons and start thinking of ways to use these commemorative events to celebrate native culture and bravery—perhaps even to help jump-start local production and tourism?

Why can’t we hold Ati-Atihan-style street parades while still observing physical distancing and other minimum Covid protocols? And why limit the activities to Cebu and Manila, when other towns and cities may also find creative ways to highlight their local histories related to Spain’s arrival and native anti-colonial resistance? Encourage young people to design and make costumes simple and cheap enough to be worn by school children. The more community people participate, the better.

Now here’s a special challenge to our local musicians: why not compose choral or instrumental pieces using native instruments and musical forms, appropriate for the twin anniversaries? Write anthems on the theme of defending the motherland and people. Celebratory or martial, indigenous or Western-influenced—take your pick. Make your piece or anthem as hummable and danceable as Baguio’s Panagbenga theme.

The challenge to Filipino musicians also applies to those in theater and the visual arts. Let’s encourage organizers to hold concerts, exhibits, shows and competitions to feature such cultural productions. Urge celebrity artists, local bands, and cultural groups to perform them, mash them up, and post them on social media.

This year is as good a time as any to publish commemorative books or update existing textbooks containing new material on the 1521 and 1570-71 events, and on Filipino anti-colonial resistance in general. Let’s not be limited to academic texts. Rather, let’s have new literary stories, dramas and screenplays, comics and children’s books on the said events. Hopefully, young and independent writers and artists can release their commemorative works online for widest possible circulation.

3. Broad public discourse and research cooperation on the legacies of Spanish colonialism

Let us encourage broad public discourse and research cooperation, through mass media and schools, on the legacies of Spanish colonialism, both the positive and negative aspects. This year should not pass without every Filipino, even gradeschool children, being inspired by new knowledge and insights about those centuries and drawing lessons for present-day concerns.

Let this commemorative year be a challenge especially to the Roman Catholic church and religious orders (and Spanish-era companies as well) to honestly revisit their roles under Spanish rule, open skeletons in their closets, publish institutional histories, and allow lay researchers to access their archives. Government and private collections of Spanish-era archives here and abroad (in Spain and Mexico, for example) would do well to allow better access to students, researchers, translators, and the wider public.

This year is a great opportunity for Philippine universities, research institutions, archives, museums, historical societies, and other cultural agencies to form closer ties with their counterparts in Spain, Portugal, and Mexico. So many collaborative projects can be advanced towards common goals in research cooperation, translations, restoration, archeological digs, ship salvage projects, site conservation, and so on.

Whatever project is undertaken, we must never forget the vital role of anti-colonial, anti-imperialist, and indigenous-people movements throughout the world. As in the Columbus quincentennial, these movements can offer an uncompromising critique of Western colonialism and refreshing alternative views of history. Filipino organizations would do well to link up with their counterparts in the Americas where Spanish and Portuguese colonialism ran along parallel lines.

But with Covid still very much around, am I merely indulging in idle fantasy? Maybe, or maybe not. Virus variants, vaccine problems, and never-ending lockdowns could again overwhelm the public mind this year like last year.

But that is precisely the challenge for Filipino progressives. Quincentennials don’t come often. Don’t let Covid victimize this once-in-a-lifetime chance to revisit our collective past as a colonized but rebellious people.

The key word for 2021 is “liberate”: Liberate ourselves, our minds, and our lockdowned lives as a people. We’ve had 500 years to learn how to do it. #